A tiny ripple spread from the enter of the pond as a small stone struck the surface. The delicate lily pads drifted, and then settled as the water calmed. A dark shape swam beneath the water, then emerged, the spotted toad settling serenely on top of a dark green leaf floating like a boat. It collapsed under the toad’s weight, reminding Firoz of how fragile life could be.
The air hummed all around the small boy sitting on the rocky shore, insects continually moving and eating all around the beautiful pond. Flowers waved in the wind, their bulbous head drooping down to the path in the wind. Leaves fell from the trees, some landing atop of the pond, stirring the water, then settling it, looking like the leaf had always been there.
Out of the thick swath of trees that surrounded the pond, a small, trembling head poked itself out. The baby deer looked around once, then emerged on it’s thin legs. Firoz watched, wondering if it was alone like he was.
It wasn’t. Soon after, a larger deer came from behind and nuzzled its spotted coat, leading it away from the pond, and away from Firoz.
Firoz felt a small twinge of disappointment. Being alone all of the time wasn’t the most fun thing in the entire world. All he wanted was a family, and when he finally got one, he wanted a friend. But nobody wanted to be friends with a small boy from India. Nobody at all. So Firoz sat by the pond, all alone.
He had been sitting there, it seemed, ever since his family had died.
A breeze blew hard through the thick trees, whistling like a badly played flute. It ruffled Firoz’s navy blue shorts and white shirt, billowing it out like a kite. He wrapped his arms around his body, rocking in the cold. India had never been cold, and Minnesota was close to freezing. One more reason it wasn’t at all like his real home.
He should be in school, the fancy private school that his foster parents had paid so much for. Alton Prep was the most miserable part of Firoz’s life. Almost all of the kids there were pampered and viewed Firoz as someone not to be associated with. He wished he could go to a public school. Maybe he could fit in there. Maybe at a regular school, where nobody was spoiled, he wouldn’t be bullied and hung upside down until his face turned grey. Maybe at a regular school, somebody would like him, and not wonder why he had a patch over one eye, where a shard of glass had pierced deep, deep into it.
His eye wasn’t the only thing that had broken since the death of his family. His heart had too.
And so Firoz sat by the pond, as he had every day since he had wandered into the forest, angry and tired of being teased. He thought of his troubles, so many there were that when a girl emerged from the swath of trees, just as the baby deer had did, Firoz didn’t look up. He didn’t look up until she sat right beside him and spoke.
“I guess you weren’t prepared for the weather today, huh?”
Firoz’s soulful brown eye glanced up from the pebbly shore of the pond.
Sitting next to him there was blond-haired girl. Her wavy blond hair was waving in the wind, and she stared intently at him.
“You don’t have a jacket on, you know, and it’s about thirty degrees out,” she said, then looked down at her own shirt. “But, I’m not wearing one either, to be fair.”
He blinked, and moved slightly away from her. He recognized the logo she wore on her shirt. It was the same one he wore on his uniform. The blond-haired girl was from  Alton Prep, the same private school he went to. She was probably one of the people who cheered and laughed while he was thrust down a toilet or garbage can.
The girl tilted her head and smiled brilliantly. “Hey, no need to move away,” she called, then frowned. “I mean, I know I had P.E today, but that doesn’t mean I smell too bad, right?” She looked at Firoz deep in his eye. “Right?” She smiled again.
Firoz blinked once. It seemed like ages since anybody had talked to him, and manners seem to have drifted out of him like a spirit soaring to the clouds.
She reached out a hand, and her elbow sank into the muddy pebbles lining the pond’s banks. “Sorry if I startled you. I’m Viv.” Viv looked into Firoz;s wide-spread eye. “And before you ask, it’s not short for Vivian.” She grinned. “It's short for Vivace.”
“Vivace?” Firoz asked, his voice small and tentative. “Really?”
Viv shrugged. “I'm told that my mum loved music.”
Firoz’s mother had loved music too. She had named her only daughter Vina.
“My sister’s name was Vina.”
Viv looked at him, and Firoz searched his head for the english word. The wind  howled through the tress once more, and he remembered.
“My sister’s name was flute.”
“Vina,” Viv closed her eyes and tilted her pale face to the light grey sky. “That’s beautiful.”
“She died,” said Firoz. His one remaining eye blinked, trying to hold back tears.
Viv moved closer to Firoz, and brushed a few strands of blond hair from her face. “My mother died too.”
Blue met brown as the two held each others gaze. All three eyes held pain, soul, and hope. Firoz’s most of all. Hope for a friend. They continued the gaze, and Firoz extended his hand tentatively.
“Firoz,” he said. Viv clasped it, and the two shook hands. It may have been decided without words, but they both knew. They knew that they would be friends.

It wasn’t long before winter settled it’s icy hold on the forest. Ice had spread across the once always-moving pond, icy blue tendrils reaching across like a blue spiderweb over the surface. The rocks by the bank were frozen into the dirt, and the grass was coated a delicate frost each morning, and by the afternoon when Viv and Firoz got out of school, the grass had collapsed and looked quite pitiful next to the brilliant white and blue beauty of the forest.
The children would lay on their stomachs beside the frozen pond, small pebbles sinking into the soft padding of their heavy jackets. There may have been less things to do near the pond in the winter, but the two had never run out of stories. They had ten years of joys, triumphs, and sorrows to tell.
Vivace Alexandrea Twrill had been born on January 1, 2005. Her mother, Allegro Twrill had died immediately, with only one wish left— to name her daughter Vivace. Her father had done so, and become a doctor soon after. It was his mission to not let another person die like his beloved wife.
Viv had a cat named Dory, a turkish white angora who had one eye like Firoz. She was the star of the school’s baseball team, and learned to read in one week. She had lived in Minnesota her entire life.
Firoz had many stories, too.
He had lived in New Guinea for ten years until three months ago. His family had died when their house had collapsed, and now lived with a pair of foster parents. He wasn’t exactly happy in Minnesota, but he didn’t feel that unhappy anymore, mostly thanks to Viv.
“It’s just not home yet,” Firoz told Viv.
“Why isn’t it home?” Viv asked, her eyes full of curiosity. There was no better place to be then Minnesota, to her.
There were, of course, many reasons why Minnesota wasn’t like home. Firoz remembered so clearly India, it’s smells and bold flavors and deep traditions. He thought of the shambling houses lining the streets, and the throngs of people. He thought, and then knew why it wasn’t home.
“We danced,” he said. “My mother loved it— she loved music and used to sing until her accident. It made her happy to see us dance.”
“And you miss dancing?” Viv said, her fingers running slowly over a frozen leaf in-between two rocks.
“Yeah,” said Firoz. “I miss it very much. It’s just not the same here, without the dancing.”
Viv stood up, her slender frame blocking out the steady stream of sunlight that shown through the sky. She walked over the bank and into the middle of the pond space, atop of the frozen grass. She stood there.
“What are you doing, Viv?” Firoz asked.
She turned towards him, and extended a purple mitten. “Come on.”
Firoz stood up uncertainly, brushing a couple of stray pebbles from his boots. He walked over the grass and took Viv’s hand.
“What are we doing?” he asked.
Viv smiled with both her mouth and eyes. “We’re dancing, Firoz. Come on!”
And so they did.
And that frozen tundra world, swept over Firoz in an ocean wave. He took it all in. The blue ice that imprisoned the pond water, and the bare branches of trees that waved like lonely skeletons. He saw the frost-tipped pieces of grass and the icy rocks. Then he saw Viv and himself, whirring and dancing in the silent and still world, broken only by their peals of laughter. It was so, so familiar. And so different, too.


And Firoz knew he was home. 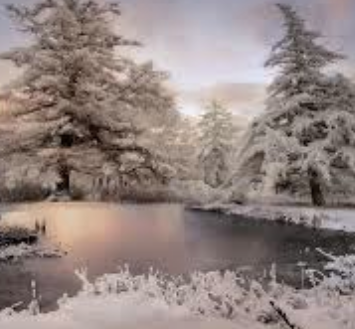